Frank Lloyd Wright In The News 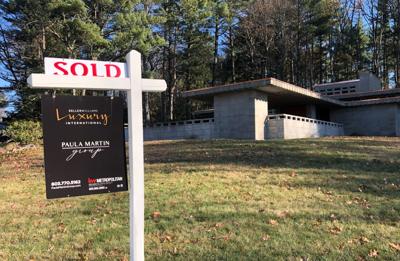 “We are the only museum in the world with two Frank Lloyd Wright houses, which we will open and make accessible to the public and preserve in perpetuity,” said Alan Chong, executive director of the museum.

The Currier Museum has owned the Wright-designed Zimmerman House, just a few doors up Heather Street from the Kalil house, for 30 years. The two are the only Wright-designed homes in the state.

Since the Kalil home hit the market on Oct. 9, the listing drew 150 interested buyers, according to listing agent Paula Martin of the Paula Martin Group with Keller Williams Realty Metropolitan. Several offers were made before the museum’s was selected.

The home has been owned by the same family since it was completed in 1957. The museum first eyed buying the property in 1994.

“That deal fell through and John Kalil, the last owner of the house, moved into this residence and lived here until his death last year,” Chong said.

The museum was able to make the purchase this time around with a boost from an anonymous donor.

“Our donor came forward with two goals, to preserve a great Frank Lloyd Wright residence and make sure it is accessible to the public for educational goals,” Chong said.

Manchester Mayor Joyce Craig called it a historic day for the city.

“From a community perspective to know that this property is going to be preserved and that the public will have access to it means so much to us, so we are very grateful,” she said.

The house was built by Toufic and Mildred Kalil. A Lebanese immigrant, Toufic was a family doctor who went on to found Elliot Hospital’s radiology department. It is one of seven of Wright’s Usonian Automatic houses ever constructed, according to Martin.

According to the real estate listing, “Wright derived the name Usonian from United States of America to denote a national style. His intention was to design houses moderate in cost for the streamlined lifestyle of post-war Americans.”

The exposed blocks make up about a quarter of the interior walls. Other walls are paneled in Philippine mahogany or set with book-sized window panes.

Many of the original features – furniture, including stiff but comfortable cushions, a countertop charcoal grill with fan, and a high-fidelity, vacuum-tube radio – remain with the house and are part of the sale.

The museum hopes to start offering tours of the house in April.

Steve Duprey, president of the museum’s Board of Trustees, said the board voted to buy the home before the donor stepped up. More fundraising will take place.

“They are in very different styles,” he said of the two Wright-designed homes. “It’s almost hard to believe it was the same architect. It will give the Currier an opportunity to boost its presence in the art world.”

Chong hopes the museum will be able to host meetings, art classes, seminars, wine tastings and other innovative programs.

See our links to other articles on selling the Kalil House

Podcast-How I Marketed The Kalil House

Find your next home