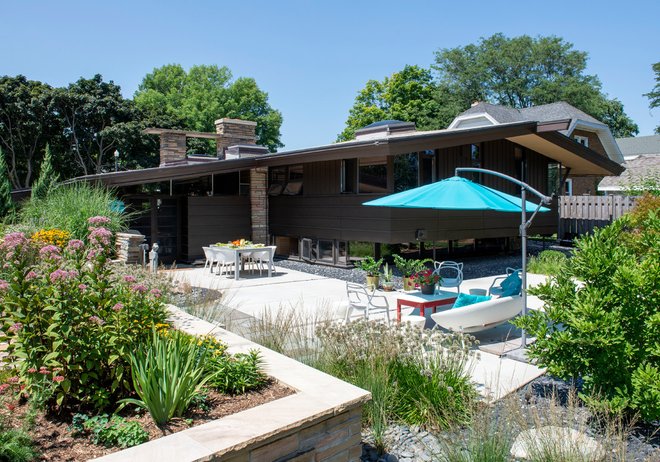 This house in Racine, Wisconsin, was designed in 1951 by architect John Randal McDonald, a protégé of Frank Lloyd Wright’s who built it for his own family. More recently, James Drzewiecki, an architect and landscape designer who has studied Frank Lloyd Wright extensively, was over the moon at the opportunity to rework the home’s neglected landscape. Drzewiecki took his cues from the architecture. “The couple who bought the house know they are living in a museum piece,” he says. He treated it as one in his design, as well. “It would be very hard not to be inspired by the architecture of a house that looks like this, but it was also important not to go overboard and overshadow the home,” he says.

Before: We’ll prepare for our trip to the back patio by checking out the front of the house because its redesign set the tone for the landscape around the historically significant house. “I think some of this front path is original because Frank Lloyd Wright often hid the front door and created a circuitous path leading up to it. As someone who studied under Wright, McDonald would likely have done that,” Drzewiecki says. But the entry was plagued with problems including crooked steps, cracked concrete and pavers that were not level. His clients wanted to create a safer entry approach while paying homage to the architecture.

The style of the yard matches the style of the house, which Drzewiecki describes as midcentury modern with Asian and California influences. He took his cues from the angles of the dramatic roofline and wedge shapes on the home’s facade. He designed a walkway that takes visitors on a zig-zagging path similar in spirit to the original circuitous path. The walkway is composed of wedge-shaped concrete panels surrounded by wedge-shaped garden beds. He filled the runnels between the panels with beach pebbles, a material used in classic California midcentury modern style. And he was able to incorporate some of the existing stone, including the boulder in front of the prominent Tennessee sandstone chimney.

The driveway and walkway work occurred in tandem. There was a slight grade change between the driveway and the entry path and gardens so Drzewiecki composed a low retaining wall of Tennessee sandstone that matched the chimney.

Here is the plan for the front yard, which shows how the wedges fit together.

Plant list. The front yard also introduces the plant palette. The mix of plants includes shrubs, grasses and perennials. (Click or tap the image above to enlarge it.) The plant choices were inspired by several factors:
Before Photo

Before. Out back, the patio was an amoeba shape with 2-by-4-inch wood inlays between the concrete panels. “It had that midcentury modern classic California look. And separate concrete pavers were common during the era,” Drzewiecki says.

But it had seen better days. Instead of drainpipes, the roof has scuppers that dump rainwater collected on the roof. This water ran back toward the house due to a bad pitch in the patio. This solves the mystery of why a couple of aesthetes had an unsightly garbage can in the middle of their patio — it was collecting that water to keep it away from the house.

Drzewiecki’s concrete contractor determined that the yard pitched about a foot from the back of the lawn to the patio, so he had truckloads of dirt hauled away in order to regrade the patio and lawn in a way that would solve the water runoff problems.

The new patio has separate paver panels that honor the original patio’s style but it has rectilinear lines. Drzewiecki placed the grill and dining area off the door on the left that leads to the dinette and kitchen. And he placed a lounging area where the homeowners could enjoy the view of new gardens off the patio.

Drzewiecki got in his wedges around the patio in the form of wedge-shaped garden and rock beds. He used pebbles and slate chips in these beds, which introduce different colors, shapes and textures. “The pebbles highlight ornamental grass groupings and they add that Asian-inspired California midcentury modern flavor,” he says. He then lined these beds with black aluminum edging to keep things straight.

He continued the slate chips underneath the cantilevered lower level and the roof overhangs.

This photo shows how well the Tennessee sandstone elements work together — the chimneys on the house and the original wing wall on the left past the statue.

The lounge and dining areas are lined up with one another, following the lines set between the patio panels.

Taking a cue from the way the old patio had wood between concrete panels, Drzewiecki used full range Pattern A bluestone and beach pebbles to fill the runnels between the concrete panels. Here the lines of pebbles define the lounge area.

The furniture and tabletop items seen in these photos belong to the homeowners, not a photo stager. Their extensive collection of Fiestaware shows off their love of bold color, and their Masters chairs by Philippe Starck were a cheeky choice. The chairs’ silhouettes combine those of three iconic midcentury modern chairs. Squint and you’ll see midcentury Saarinen, Jacobsen and Eames chair silhouettes in the lines.
Before Photo

Before. This photo shows the original Tennessee sandstone wing wall, some makeshift steps up to a raised garden and an odd depression in the patio. While Drzewiecki thinks this may have been some sort of small pond, he couldn’t find a spout and it had turned into a mucky mosquito-attracting puddle.

The original wing wall, right, was the start of a great idea. “The raised garden was a weedy mess, but it had potential,” Drzewiecki says. He extended the garden with retaining walls that match the original Tennessee sandstone, and created a walking garden that runs along the side of the yard.

He paid homage to the depression with the shape of the patio’s edge. He filled the area where the pond had been with a combination of the slate chips and beach pebbles and placed a little sprite statue there. His design could be turned into a water feature someday, an option that the homeowners are considering but have put off for now.

There’s a pleasing transition from patio to garden thanks to some safe new steps and material inspired by the home’s interior. “The house has full range slate flooring,” Drzewiecki says. “So the full range bluestone pavers pay homage to that.” Note the way the bluestone extends partway down the runnel between the concrete panels. This enhances the transition between the edge of the patio and the retaining walls.

The walking garden provides a beautiful view along the patio and connects the front yard to the back yard. Drzewiecki repurposed pavers from the original front walk and placed them under the bench.

The mix of flowers, grasses and shrubs provides year-round interest and loads of color. “I’m never one for ‘choir planting’ — tallest in the back down to shortest in the front,” he says. Instead he mixes up the planted forms in terms of height, shape and texture to add dimensionality.

The dining area enjoys the walkway garden views too.

Here is the plan for the backyard.

Plant list. This is the plant list of the perennials and groundcovers in the backyard. The selection is based on native prairie plants but Drzewiecki amped it up with some colorful additions like salvia and allium to suit the homeowners’ love of bold color.